These different properties demonstrate  the broad spectrum of our architectural & bespoke lighting design combined with AV and home automation.

The Lighting in this warehouse apartment was based on concealed LED light sources to provide a subtle glow rather than the brash, inefficient downlights used in the original conversion.

The only source of light in the hallway is a series of Linear LEDs hidden behind concrete wall panels and programmed to fade up in sequence when triggered by a sensor at the front door.

The program has different settings depending on time of day and can be overridden according to mood. 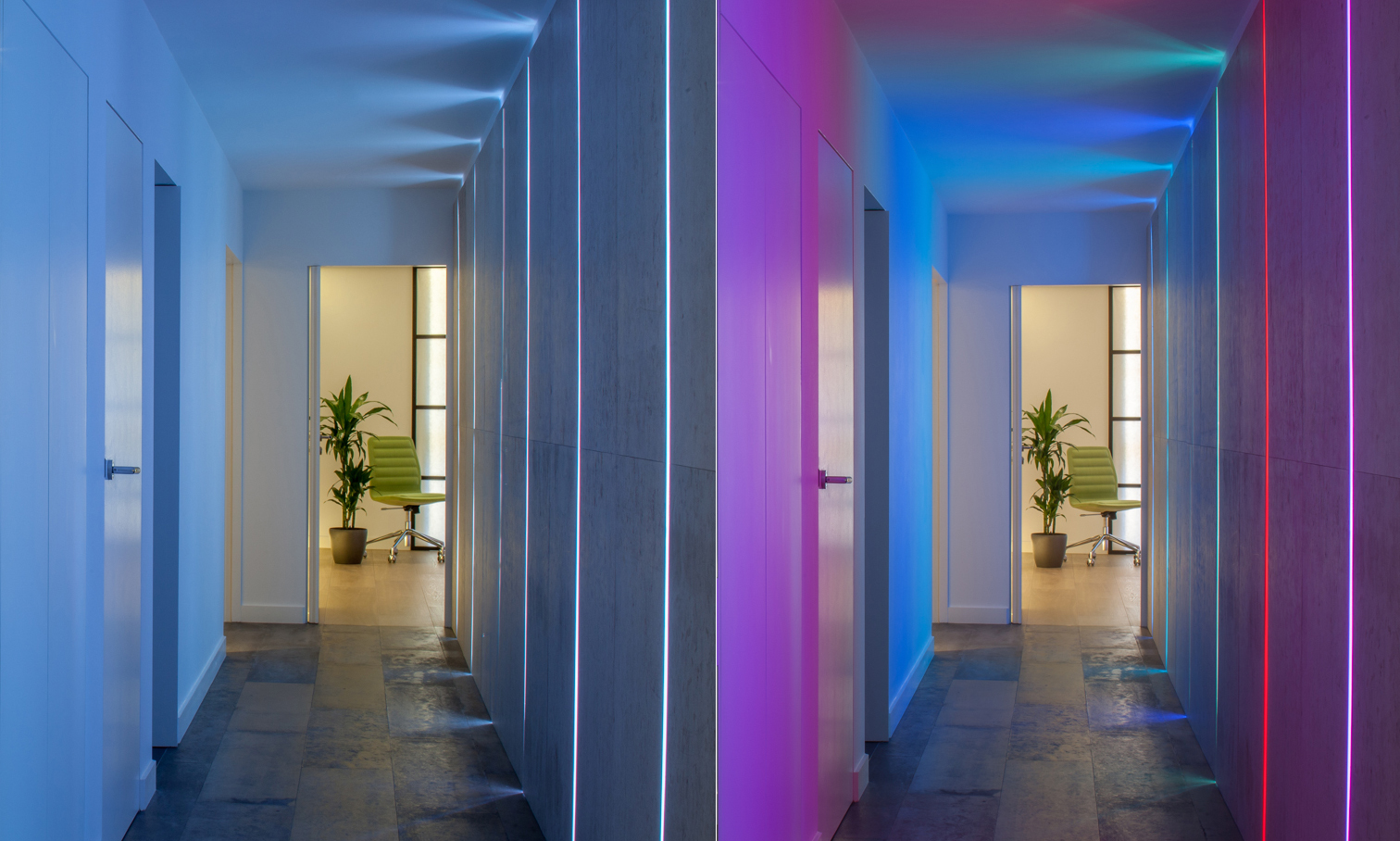 As the hallway, living room and kitchen are all part of an open-plan area, the lighting program in the living room also includes  the hall to add depth  and to prevent a dark space in the background.

In line with our general approach to lighting design, downlights are only used to highlight features or artworks, not for general illumination. By lighting predominantly with indirect LED strips, the result is light and airy without being dazzling. 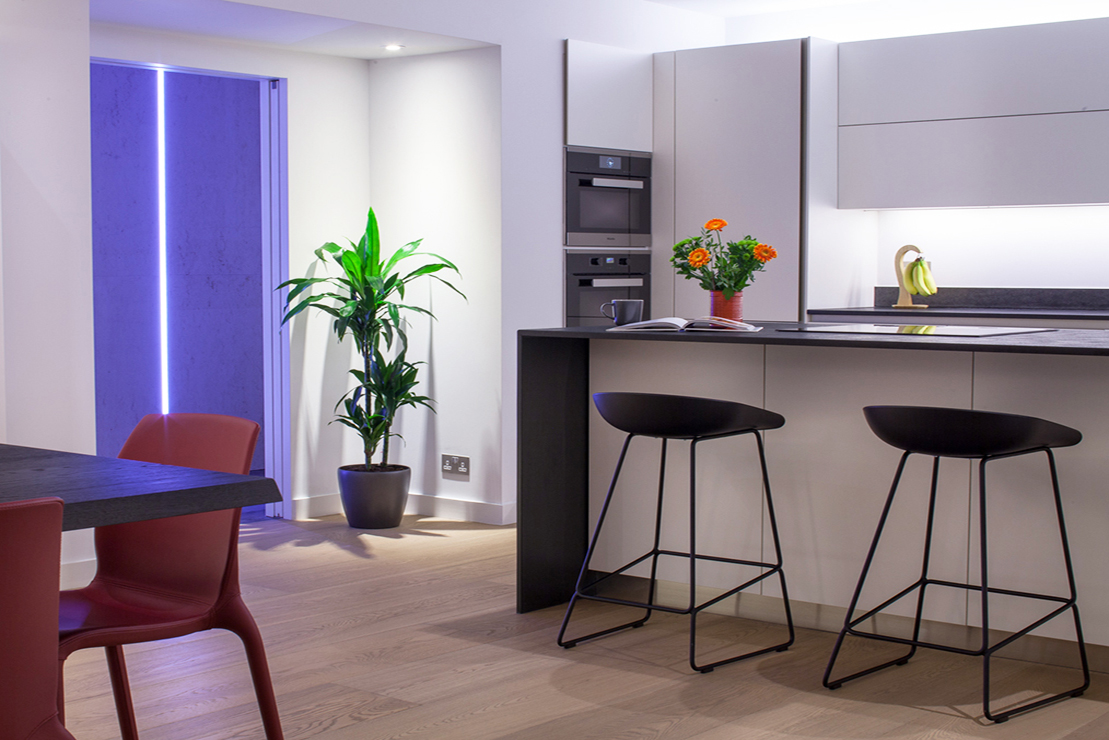 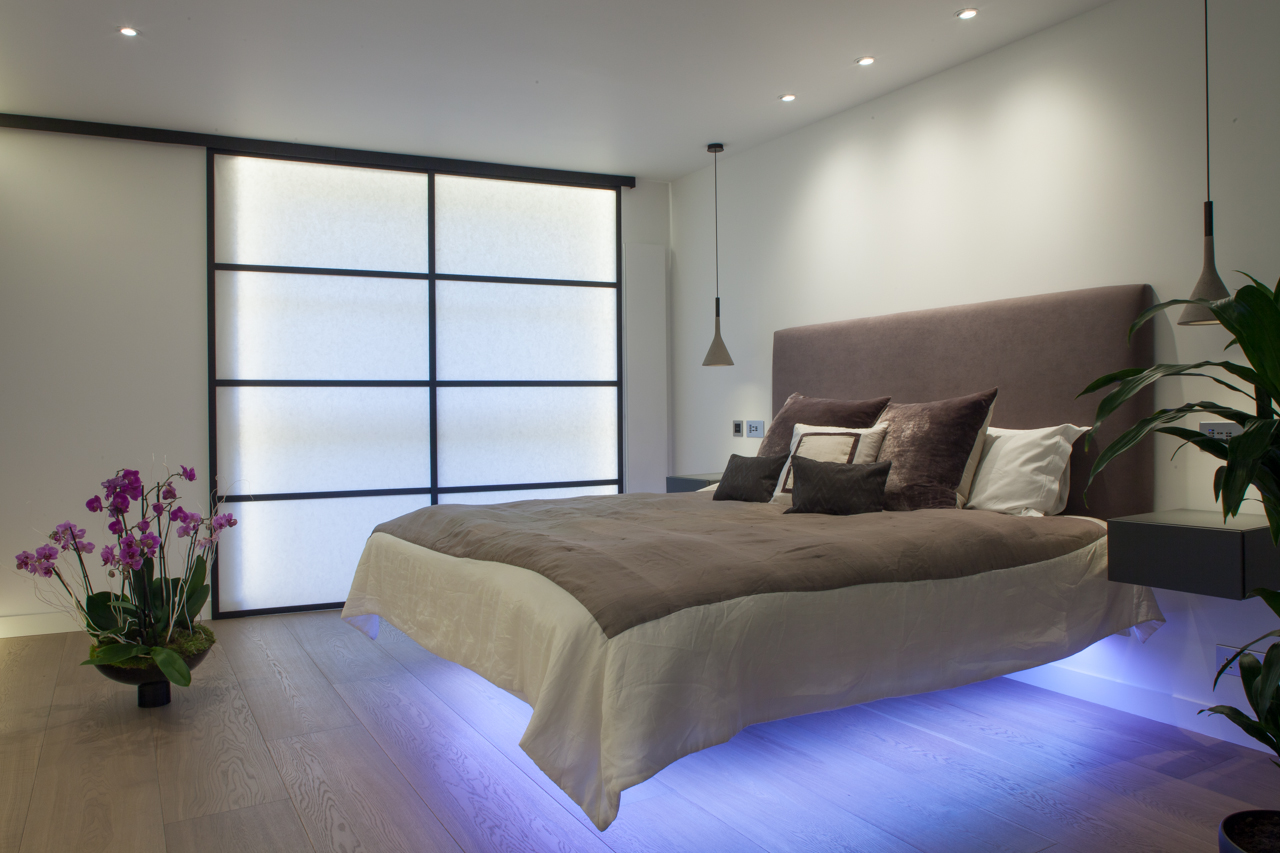 The client particularly enjoys the magic carpet effect created by the lighting under the cantilevered bed.

A particularly effective element is the linear LED lighting concealed in the window recess which softly illuminate the Shoji screens from behind to create a daylight effect even when dark or during those dark British winters. 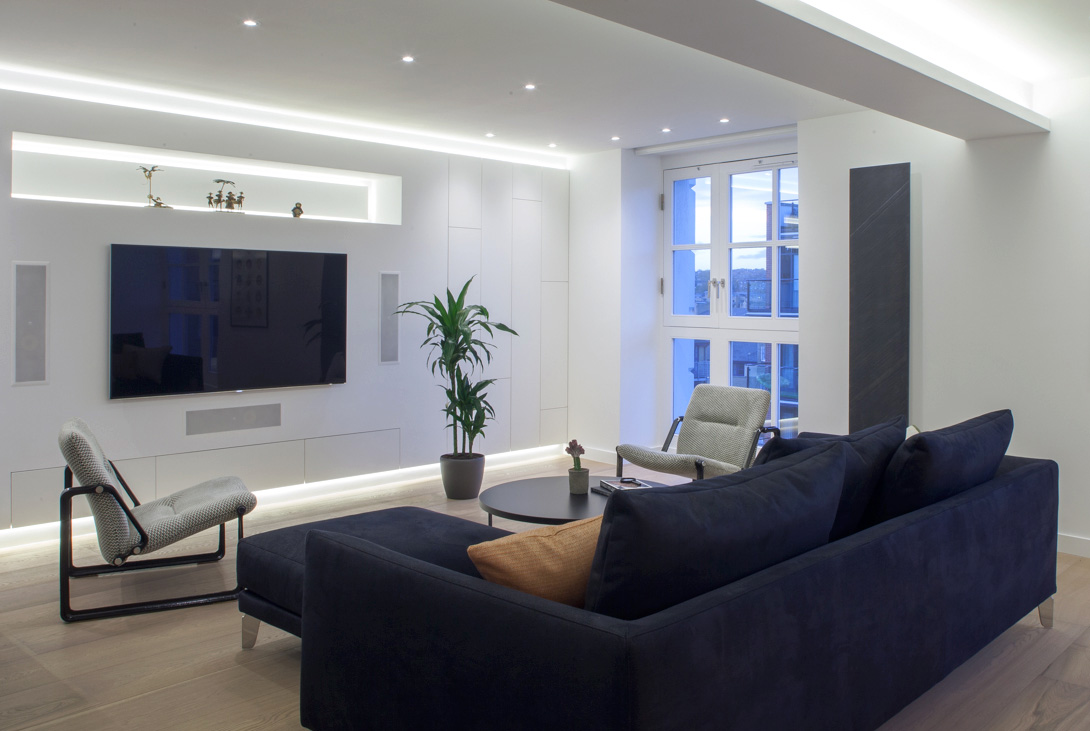 AV & HOME AUTOMATION - We worked with the client & interior designer to create a media wall that conceals a complete home cinema system with flush wall & ceiling speakers. The system can relay  to other rooms via ethernet with WiFi control.

The blinds in the living room and master bedroom are motorised and controlled from the wall mounted keypads, or App. 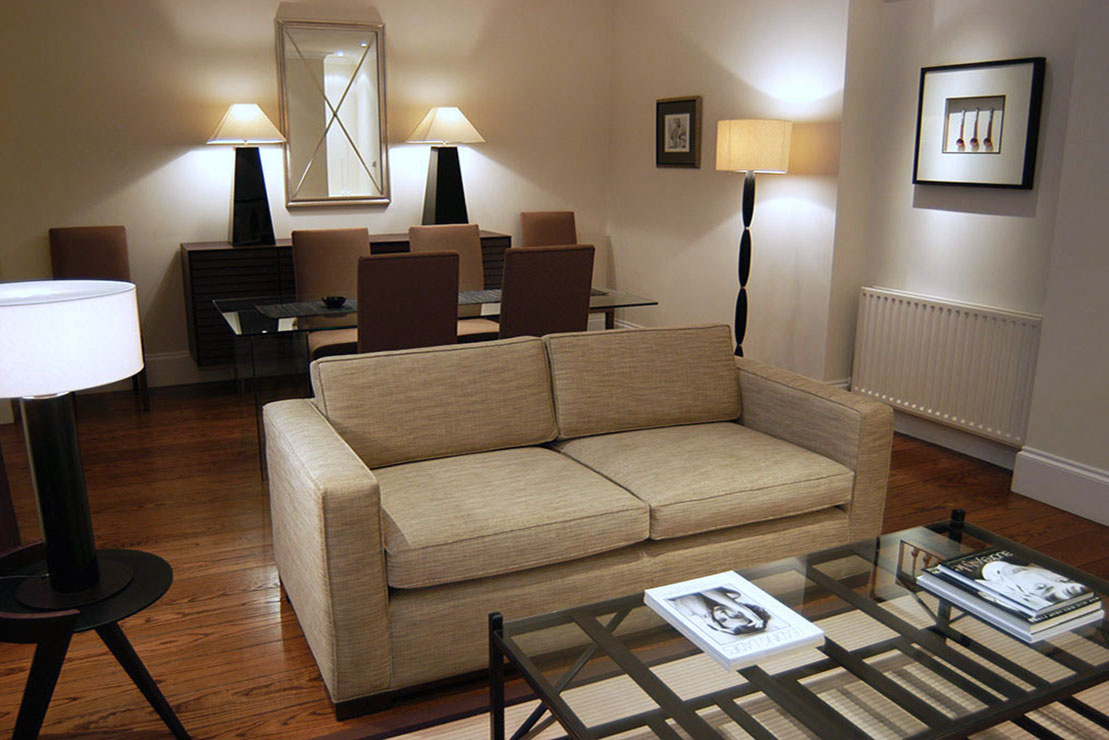 As this property was to be let fully furnished we worked closely with the interior designer to ensure each lamp worked well with the chosen furniture. This helped to stage the apartment for maximum impact and able to achieve maximum rental value.

The rental income was particularly important as this property belongs to the Winston Churchill Memorial charity which uses income from this and several other apartments to fund its charitable works. 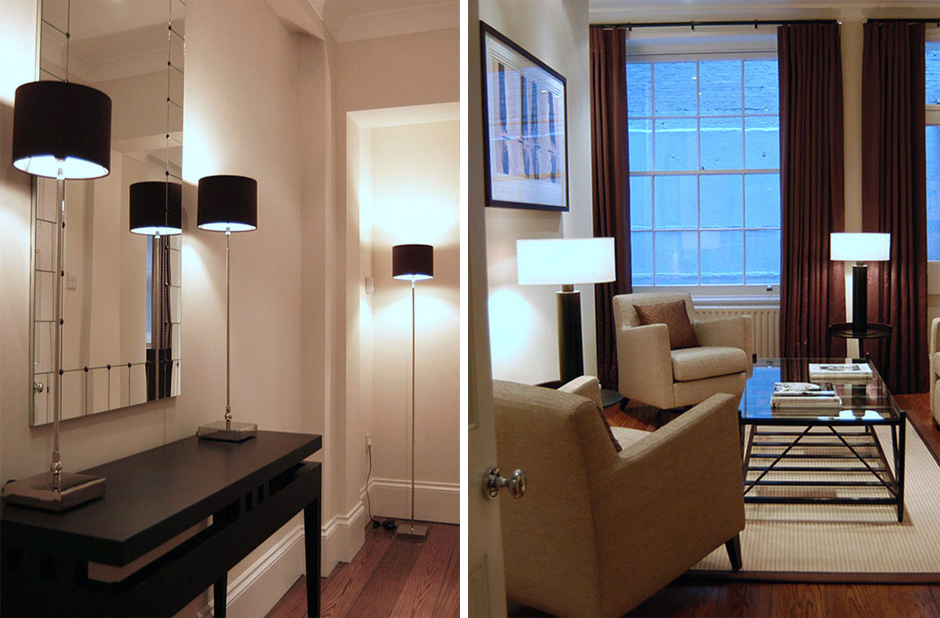 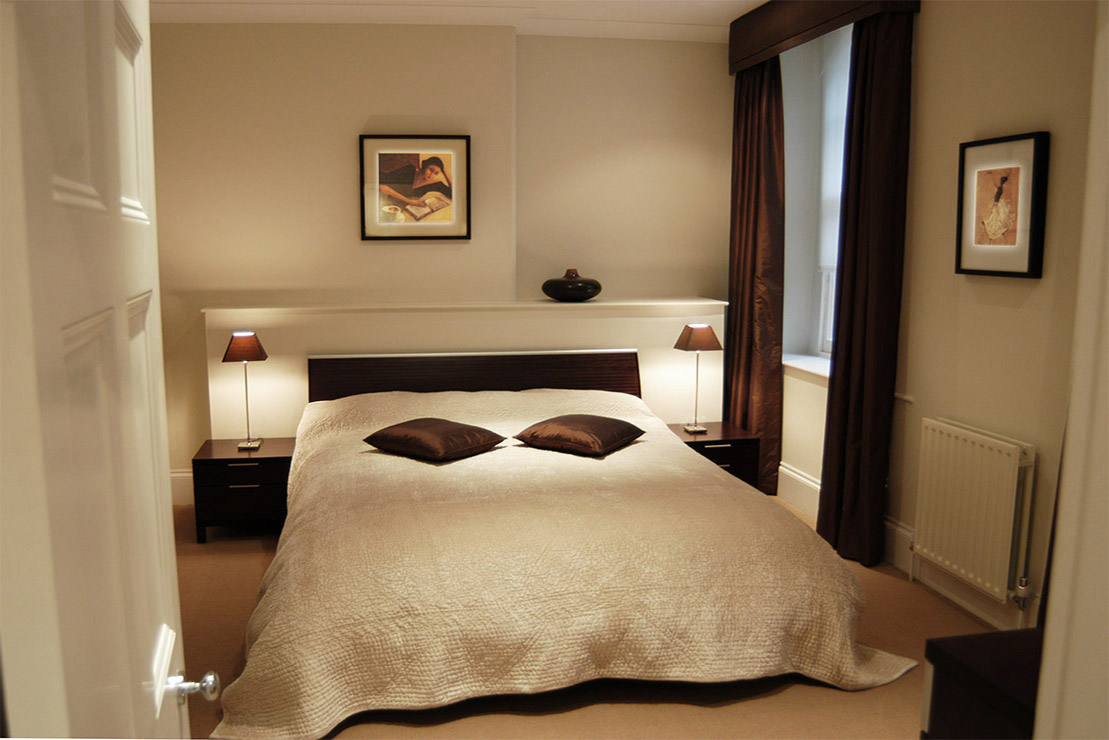 The use of concealed profile spots highlights pictures in this bedroom, whilst the pool of light directed onto the bed provides accent and focus to the scene.    Simple, but effective when executed correctly. 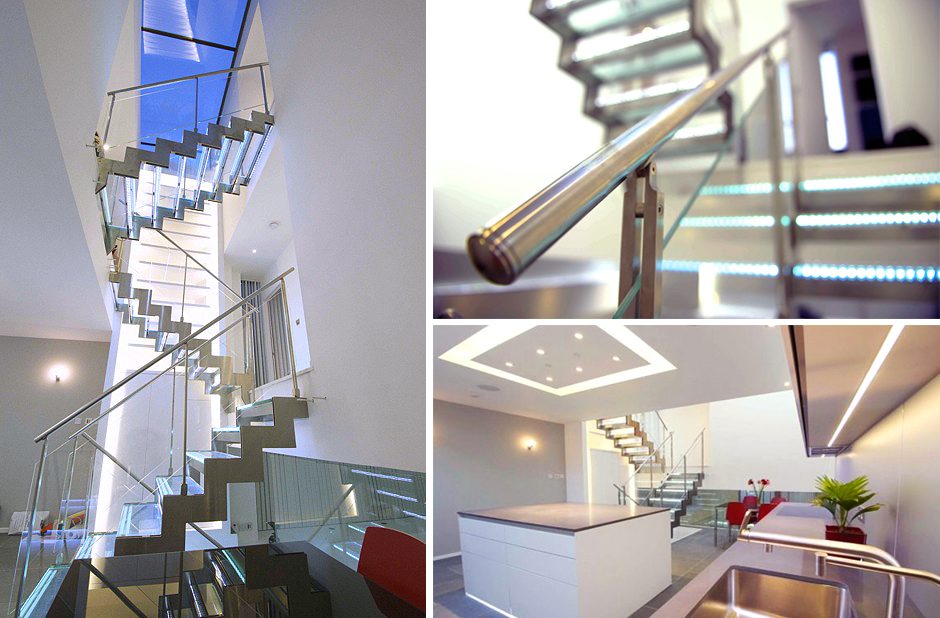 The focal point of this minimalist eco home is the illuminated steel & glass staircase which links all four floors via an exposed central lightwell. This meant that the lighting needed to be integral to the staircase which was achieved by incorporating linear LEDs into each tread, lighting each step individually via refraction through the glass.

Behind the stairs is a bookcase which also incorporates concealed LEDs providing a soft glow to the books & shelving.

The bookcase and treads provide the only lightsouces necessary in the entire stairwell where any other form of lighting would detract from the sculptural clean lines of the staircase. 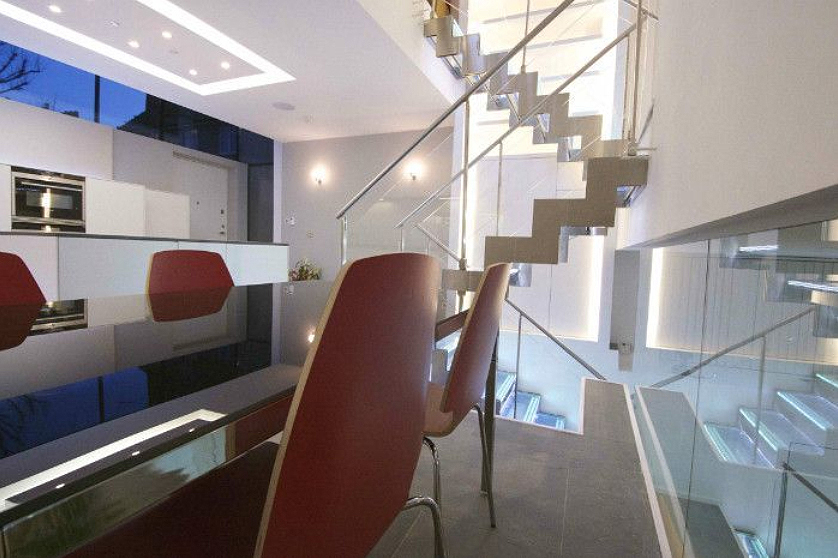 A further refinement in the design allows for a 24 volt battery backup to ensure that the stairwell remains lit even during a power cut, providing a clearly lit escape route in the event of an emergency since this is the only means of access to each floor.

AV & HOME AUTOMATION - The whole system was designed to operate via our bespoke iPad App to control lighting, sound, vision & security cameras, all accessed from a single screen.

The whole house audio system relays sound to every room, with the ability to link into the TVs and home cinema when required.

The cinema was designed along the lines of a professional viewing room (as shown above, prior to furnishing) with a projection booth within a small mezzanine area which also houses the rest of the AV & Lighting hardware.
‍
The theatrical atmosphere was enhanced by the use of colour-change spots above the motorised screen and the backlit wall panels are covered in acoustic fabric to prevent the area sounding too live.
In addition to domestic installations, we regularly undertake commercial projects such as Bars & Hotels, Gyms & Saunas, Theatrical Venues & Arts Centres, Television & Film.
OTHER SELECTED PROJECTS
Tresillian House Conference & Arts Centre
Conference & Arts Venue - Cornwall

Learn More About Us